Welcome to the Cate Blanchett Wiki

The wiki is about the actress, Cate Blanchett 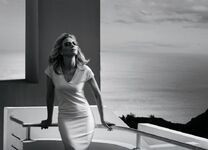 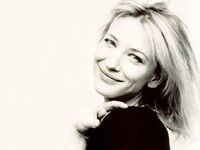 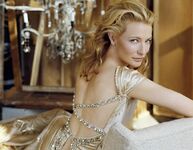 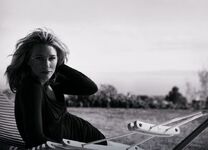 She has received critical acclaim and many accolades, including two Academy Awards, three Screen Actors Guild Awards, three Golden Globe Awards and three BAFTA Awards. She was appointed Chevalier of the Order of Arts and Letters by the French government in 2012. In 2014, she was presented with a Doctor of Letters by Macquarie University in recognition of her extraordinary contribution to the arts, philanthropy and the community, her third honorary degree from major Australian institutions.

After a trip in Europe she traveled to Egypt where she was asked to be an extra on an Egyptian boxing movie, Kaboria. Upon her return to Australia she then dropped from the University of Melbourne and transferred to the National Institute of Dramatic Art (NIDA) in Sydney to pursue the acting profession. She graduated from NIDA in 1992.

Her first major stage role was opposite Geoffrey Rush in the 1992 David Mamet play Oleanna, for which she won the Sydney Theatre Critics' Best Newcomer Award. She also played the role of Ophelia in an acclaimed 1994–95 Company B production of Hamlet, directed by Neil Armfield, starring Geoffrey Rush and Richard Roxburgh; She was nominated for a Green Room Award.

Blanchett appeared in the 1994 TV miniseries Heartland opposite Ernie Dingo, the 1995 miniseries Bordertown with Hugo Weaving, and in an episode of Police Rescue entitled "The Loaded Boy". She also appeared in the 1994 telemovie Police Rescue as a teacher taken hostage by armed bandits, and in the 50-minute drama Parklands (1996), which received a limited release in Australian cinemas. Also in 1994, she played a role in an episode of the long-running Australian TV series GP, as Janie Morris, a woman living with her brother (Daniel Lapaine as Sean Morris) in a consensual incestuous relationship.

Blanchett made her international film debut with a supporting role as an Australian nurse captured by the Japanese Army during World War II, in Bruce Beresford's 1997 film Paradise Road, which co-starred Glenn Close and Frances McDormand. Her first leading role, also in 1997, was as Lucinda Leplastrier in Gillian Armstrong's production of Oscar and Lucinda, opposite Ralph Fiennes. Blanchett received wide acclaim for her performance, and earned her first Australian Film Institute (AFI) Award nomination as Best Leading Actress, losing to Pamela Rabe in The Well. She won the AFI Best Actress Award in the same year for her role as Lizzie in the 1997 romantic comedy Thank God He Met Lizzie, co-starring Richard Roxburgh and Frances O'Connor. By 1997, Blanchett had accrued significant praise and recognition in her native Australia.

Her first high-profile international role was as Elizabeth I of England in the critically acclaimed 1998 film Elizabeth, which earned her an Academy Award nomination for Best Actress. She became the first and only actress in the history of The Academy Awards to be nominated in this category for the part. Blanchett lost out to Gwyneth Paltrow for her role in Shakespeare in Love, but won a British Academy Award (BAFTA) and a Golden Globe Award for Best Actress in a Motion Picture Drama. The following year, Blanchett appeared in the Mike Newell comedy Pushing Tin, with critics singling out her performance, and the Anthony Minghella film The Talented Mr. Ripley alongside Matt Damon, Gwyneth Paltrow and Jude Law. Blanchett received her second BAFTA nomination for her performance in Ripley.

Blanchett received a host of new fans when she appeared in Peter Jackson's Oscar-winning blockbuster trilogy, The Lord of the Rings, playing the role of Galadriel in all three films. In addition to The Lord of the Rings, 2001 also saw Blanchett diversify her portfolio with a range of roles in the dramas Charlotte Gray and The Shipping News and the American crime-comedy Bandits, for which she earned a second Golden Globe and SAG Award nomination. In 2002, Blanchett appeared, opposite Giovanni Ribisi, in Tom Tykwer-directed Heaven. 2003 saw Blanchett again playing a wide range of roles; Galadriel in the third and final installment of the Lord of the Rings film trilogy (which won the Academy Award for Best Picture), the Ron Howard-directed western-thriller The Missing, Jim Jarmusch's Coffee and Cigarettes for which she received an Independent Spirit Award for Best Supporting Female nomination, and the biographical film Veronica Guerin, which earned her a Golden Globe Best Actress Drama nomination.

In 2005, she won her first Academy Award in Best Supporting Actress for her acclaimed portrayal of Katharine Hepburn in Martin Scorsese's The Aviator. This made Blanchett the first actor to garner an Academy Award for playing an Oscar-winning actor. That same year, Blanchett won the Australian Film Institute Best Actress Award for her role as Tracy Heart, a former heroin addict, in the Australian film Little Fish. Though lesser known globally than some of her other films, Little Fish received great critical acclaim in Blanchett's native Australia.

In 2006, she starred opposite Brad Pitt in the multi-lingual, multi-narrative ensemble drama Babel, which received seven Academy Award nominations, the Steven Soderbergh-directed The Good German with George Clooney, and the acclaimed Notes on a Scandal opposite Dame Judi Dench. Blanchett received a third Academy Award nomination for her performance in the latter film.

In 2007, Blanchett reprised her role as Queen Elizabeth I in the sequel Elizabeth: The Golden Age, and portrayed Jude Quinn, one of six incarnations of Bob Dylan in Todd Haynes' experimental film I'm Not There. She won the Volpi Cup Best Actress Award at the Venice Film Festival (accepted by fellow Australian actor and I'm Not There co-star Heath Ledger), the Independent Spirit and Golden Globe Best Supporting Actress Award for her portrayal of Jude Quinn. At the 80th Academy Awards Blanchett received two Academy Award nominations—Best Actress for Elizabeth: the Golden Age and Best Supporting Actress for I'm Not There—becoming the eleventh actor to receive two acting nominations in the same year, and the first female actor to receive another nomination for the reprisal of a role. Of her achievement that year, critic Roger Ebert said, "That Blanchett could appear in the same Toronto Film Festival playing Elizabeth and Bob Dylan, both splendidly, is a wonder of acting".

She next appeared in Steven Spielberg's Indiana Jones and the Kingdom of the Crystal Skull, as the villainous KGB agent Col. Dr. Irina Spalko, and in David Fincher's Oscar-nominated The Curious Case of Benjamin Button, appearing on screen with Brad Pitt for a second time. On 5 December 2008, Blanchett was honoured with a star on the Hollywood Walk of Fame at 6712 Hollywood Boulevard in front of Grauman's Egyptian Theatre. Blanchett provided a voice for the English version of the film Ponyo, released July 2008, and appeared opposite Russell Crowe in Ridley Scott's Robin Hood in 2010. In June 2011, she attended the premiere of her film Hanna, directed by Joe Wright, at the Sydney Film Festival.

In 2012 Blanchett reprised her role as Galadriel in Peter Jackson's adaptations of The Hobbit, filmed in New Zealand. Also in 2012, Blanchett voiced the role of "Penelope" in the Family Guy episode "Mr. and Mrs. Stewie". Blanchett returned to Australian film with her appearance in The Turning (2013), an anthology film based on a collection of short stories by Tim Winton.

Blanchett played the lead role in Blue Jasmine (2013), written and directed by Woody Allen, and costarring Alec Baldwin and Sally Hawkins. She received rave reviews for her performance, with some critics calling it the best role of her career (surpassing her acclaimed starring role in Elizabeth). The performance earned her more than 40 industry and critics awards (including LAFCA (tied), NYFCC, NSFC, and Critic's Choice Awards), the Santa Barbara International Film Festival Outstanding Performance of the Year Award, an Australian Academy Award (AACTA), a SAG award, Golden Globe award, BAFTA award, an Independent Film Spirit Award and an Academy Award for Best Actress. Blanchett's win makes her just the sixth actress to win an Oscar in both of the acting categories. She is the first Australian actor to win more than one acting Oscar.

In 2014, Blanchett co-starred with Matt Damon and George Clooney in the latter's film, The Monuments Men, based on the true story of a crew of art historians and museum curators who recover renowned works of art stolen by Nazis. Blanchett voiced the part of Valka in 2014's How to Train Your Dragon 2 . The animated film was a critically-acclaimed, box-office success, won the Golden Globe Award for Best Animated Feature Film and received an Academy Award nomination.

Retrieved from "https://cate-blanchett.fandom.com/wiki/Cate_Blanchett_Wiki?oldid=5148"
Community content is available under CC-BY-SA unless otherwise noted.